A new release is out for We Love RolePlay’s current round! Senzafine’s release at the event is the Lothíriel dress, a brand line of gowns for the fair and lovely ladies! The dresses are color matched as closely as possible so that you can use the Aesbrennil shoes with them (as is the case with the Beriawen separates and Deorwyn gowns) for ease of use.

This dress comes in 4 separate HUD color packs, with each pack holding 4 colors each with gold and silver trim options. All color packs come with a super awesome Ribbon HUD with many more options. The Ribbon HUD allows you to choose ANY of the offered colors from all 4 color packs in Gold or Silver embroidery options as well as controls to hide or show the ribbons, should you so choose.

The dress comes in the usual 5 standard sizes plus 2 fuller sizes for those with more curves so stop by the event to try out a demo. Each pack is on special introductory sale price of L$325 (25% off normal pricing) so hurry before the month is over!

Visit our booth at We Love RolePlay (WLRP) in-world to try the demo and fall in love (we hope) with this new dress! If you miss this, they will be released to the main store in under the full price (so hurry and get it at discount). As a reminder please note that we have a new Senzafine store location.

Senzafine was invited to take part in the Fantasy Collective last month, marking their anniversary. They created a very fun theme that allowed people to be imaginative in all the fun ways there are available at a RL Renaissance Faire. For this one, I wanted to stick to the theme of the Renaissance dresses you always see the court ladies wearing at these faires. It has a very fairytale quality about it with the color combos used being so vivid and at times a bit otherworldly. The dress here is called Caterina and it is available only at the Fantasy Collective until the 15th. It wont be in the store until January so get hoppin now! 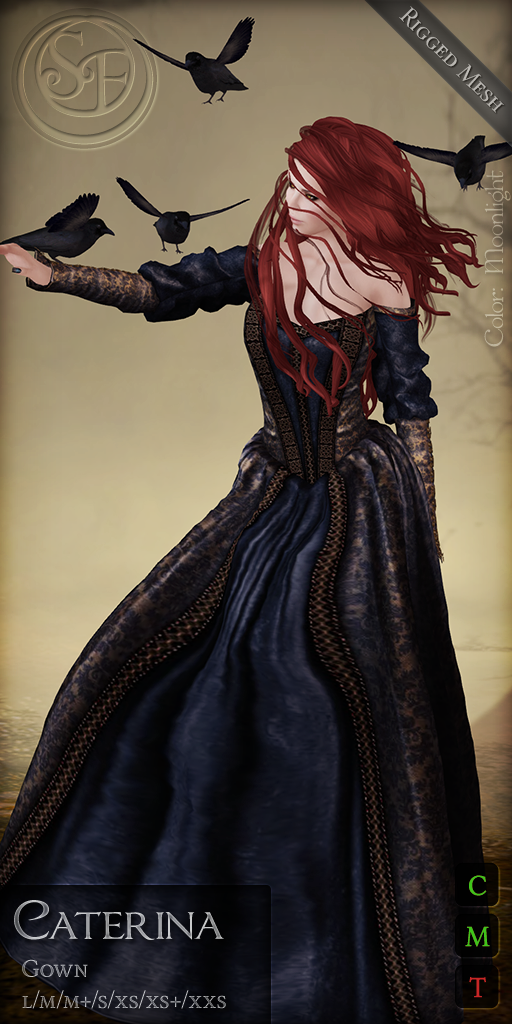 To get to the event, Hitch a Ride to the Fantasy Collective

Trying to find time to catch up with posts can be a daunting thing. Just when I think I have time, one of my jobs (I have 2 other jobs on top of running Senzafine, btw) has an emergency marketing materials request. Fortunately that has lulled a bit and now I can focus back on getting Senzafine back in running order. With that, I want to update you all on past event releases here, currently running events will be in separate posts. One that has come and gone within the month of October was a new annual mega-event, Mystic Realms Faire. There was 1 brand new release and an extension color line release there from Senzafine. The new dress, Elaisse has a regal elvish feel, with a short-sleeved robe over a beautiful underdress. This line comes with the usual 8 color combos. These will be available at the mainstore this weekend.

The extension color line release was to the Mirdain Leggings. This set was released for both women’s and men’s versions in new leather colors! These also will be put out into the mainstore this weekend. 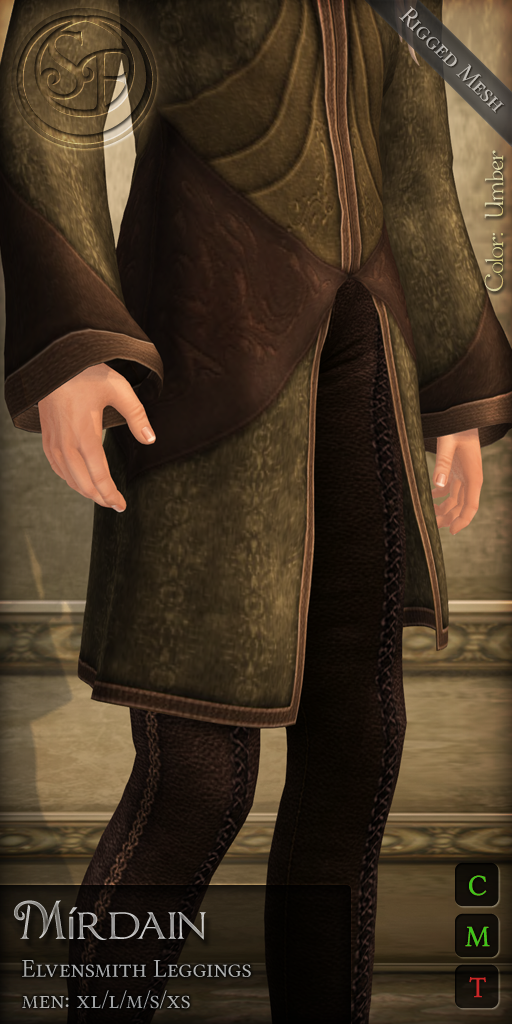 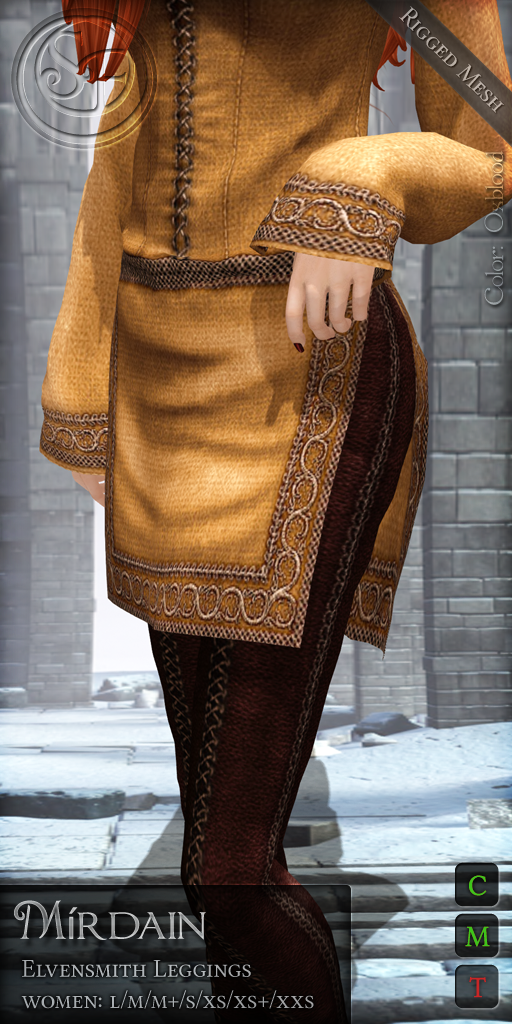 As in the September releases post, although the events are over, you can still stop by the main store and grab your favorite colors starting this weekend! Visit the In-World Store

Other than the ongoing Seelie Court event, I’ve also had a few other releases that sadly I was unable to post about due to RL craziness. We <3 Role-Play was one of the more challenging rounds for me as I wanted to put as much detail into this as possible to make it feel more than what its polygons claimed it was.

Texturing, my friends, is really important to game companies. This proves true especially in MMO’s. New content can be challenging for frequent releases, so many times they use the same models and geometry and spin it a different way.

I want to bring that same workflow into SL and I know of a few other designers that do the same. The dress I featured this round, had a lot of details in texture. When textured differently it will be like a whole different dress, even though the model shape is the same. The first texturing of this dress though, I went as far out as I could on details. Enough talk, on to Aravereth.. the lovely court gown!

The next release was for A Clockwork Spiral. Many of you in-world know how wildly successful it was due both to the build as well as everything the merchants were offering. We raised so much more than last year for the National Kidney Foundation.. and we are talking like, numbers that were creeping in to Cursed’s most successful event: World Goth Fair.

I released an officer’s jacket for women that dipped both into Steampunk as well as Dieselpunk, though my aim was more for the latter. Echelon is a new series I want to explore further but we shall start with the ladies first. This one comes in 8 colors, all reminiscent of military life in earlier days. There was a special color set which donated 100% and a small percentage of all other sales at the event both to benefit the NKF. Onwards to the ad image! 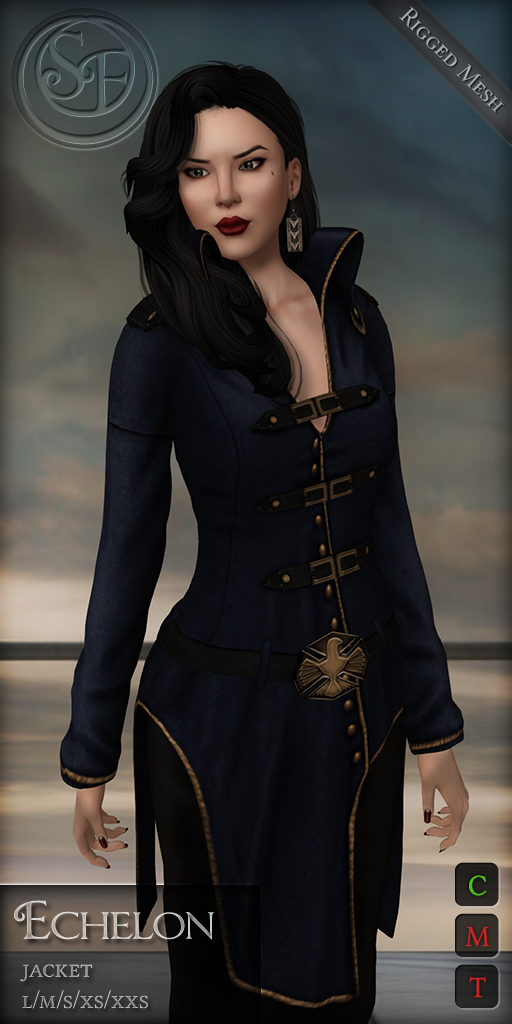 Though the events are over, you can still stop by the main store and grab your favorite colors! Visit the In-World Store

Now that I have a bit of time, I can tell you all about the crazy week I had! Well not ALL about, but what the craziness wrought. As many of you know, I am a sponsor for the World Goth Fair to benefit the Sophie Lancaster Foundation. It’s a wonderful cause that will help spread and educate tolerance among individuals regardless of how they look or lifestyle. For more info, check out the official World Goth Fair Website and read more on Sophie’s story and her mother’s mission. On with the pictures! I created some very lovely Lolita dresses for the occasion. The dress pack will be available as a set only for the duration of the fair, afterwards they will be single packs like the rest of the dress colors. The Crimson Noir Combo dress pack will be donating 100% proceeds to the charity. The rest of the dress colors are donating 50% proceeds towards this fantastic cause.

I urge you to come by the Goth Fair at both locations (Yes I got a booth at both locations for everyone’s convenience!) and browse all the other wonderfully lovely items that other designers have created! When you’re done, stay a spell and enjoy the music courtesy of Club Gothika on Cursed sim!

Hello Darlings! I am really really late in posting this, but better late than never! ;D I added 3 new colors to the Chloe lineup  for The Outlet earlier this month and they are in the process of being put up in the shop now that the round is over.

Get it now @ Senzafine (Mainstore)

Hey peoples! The Kawaii Fair is in full swing and Senzafine is part of the action! I’ve created some cute and lovely dresses by the name of “Chloe” that will have you ready for any garden party. Also, as to not disappoint my Home & Garden customers, I also created a pretty vintage-inspired ottoman complete with 5 colors (omg you can match your dress to your seating!) and 20 animations for genders of all types! 😉 Check out the pictures and then teleport to the fair!

Your ride to the fair: Senzafine @ Kawaii Fair 2013

This is a bit late but I have a new set that has been released at Spring Fling in 4 different colours and more colors to come in the shop when the event ends! See below for the pretty tunics inspired by the amazing spring Hindu festival.. Holi (Festival of Colours).

The SL Buddy Walk is going on til the end of this month and there are a ton of fabulous designers donating proceeds of some of their creations towards the benefit of this wonderful cause. It’s a charity event with vendor proceeds going towards NDSS (National Down Syndrome Society). Senzafine has 2 exclusives out at the event with 100% proceeds going towards NDSS. I encourage you to get any of our products that you’ve been eyeballing at the event as a 25% proceeds donation also goes to NDSS for all other purchases made there. Here are the two exclusive releases:

Senzafine is happy to announce a new clothing release this weekend. The Melissa Boatneck Knit Top is now available at the main store. This rigged mesh top is available in eight colors: alpine, aubergine, berry, espresso, midnight, onyx, teal and wine. Come on over to the main store and demo for yourself.

Here’s your ride: Senzafine (In World)

My dear friend Sohma Dix of Paper Moon is a jewelry artist and creates gorgeous pieces of wearable art! Check out her shop and indulge yourself!